The initial idea and motivation are summarized in the earlier post here. I was waiting for a suitable opportunity to undertake a quattro activation of 2x WWFF and 2x SOTA in the Karwendel Nature Park by a single expedition. And an opportunity arose on Friday. The weather forecast was just great. We invited our friends over for dinner tonight, so unfortunately, I had a limited amount of time for my activities.

The summits can be reached from the north by a hiking trail starting in the Fall village (773m) near the Sylvensteinsee. I started at the village a little late at 6:00 UTC. Already at this point the Fall village was overcrowded, the parking lots were fully occupied. To save time and avoid the crowd, I chosen a rarely hiked trail along a stream that flows into the Dürrach river. In retrospect, that was a good decision! The lonely path was fun and also beautiful. The trail is neither signposted nor marked and requires good orientation skills. If you get lost, just follow the stream until you cross another path. A beautiful terrace waterfall starting a stream. At the latest here you will need to turn right towards the saddle between the the Stierjoch and Kotzen.

Exactly tree hours later I arrived at the Stierjoch, OE/TI-649 in OEFF-0043. A couple of hikers were enjoying a great view over the Karwendel Nature Park from the summit top. So I did for a while too... 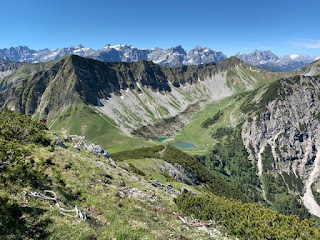 View from the Stierjoch over OEFF-0043 towards the Delps lake. 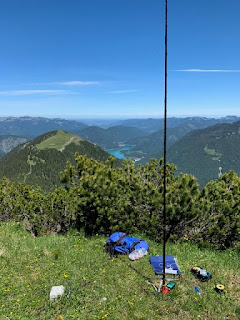 My operating spot on the Stierjoch, OE/TI-649. View to the north.
My next summit the Kotzen, DL/KW-043 is in the background. 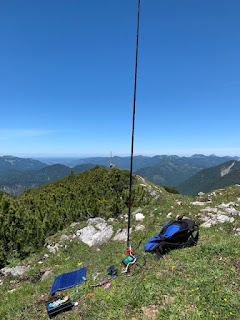 My operating spot on the Kotzen, DL/KW-043.
Some hikers around the summit cross are in the background. 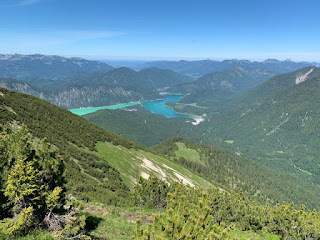 I was back at the Fall village at 14:15 UTC (15 minutes behind schedule) but came home just in time because I lost some time in traffic. The quattro activation was successful despite poor propagation conditions. The number of QSOs was not exciting though. However, I had a really nice bike & hike tour and another nice day in the alps. The GPS route showed 26 km, which were covered for 111 QSOs, 14 SOTA points and 3 WWFF Activator Award points.