I made Watzmann crossing and first activated DL/BG-039, Watzmann Mittelspitze and DL/BG-040 Watzmann Suedspitze back to September 2009. I guess I was waiting long enough for activation of its little brother DL/BG-067, Kleiner Watzmann, 2307m. I was wondering why there were no takers so far!? Now I know why, there's something to be said for that, the route is fair challenging and long. Now, 9 years later I crossed the Kleiner Watzmann and first activated the little brother and, by this, completed my Watzmann Full House on September 9th, 2018. And I made it to the summit easy within 3 hours (from Hammerstiel).

What a sunny day! It was a nice and a lonely tour, I very enjoyed. A couple of climbers on the top.  The ascent was via the Kleiner Watzmann Nordgrat which was not easy to find, the way down was via the Mooslahnerkopf, 1815m.  I spent about 2 hours on the top enjoying every minute of being there. A great view towards the big Watzmann ridge and Steinernes Meer. The crossing of the Kleiner Watzmann requires good climbing skills and some experience, but, in summary, is technically easy. The main challenge for me were wet and slippery stones on the way down, not to mention the loose gravel. 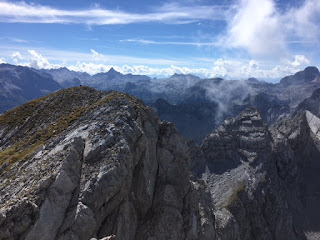 View towards the Steinernes Meer. 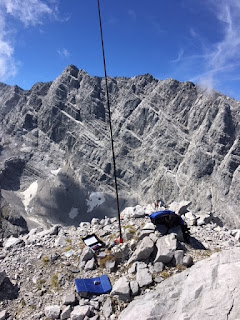 SOTA as usual. A gust of wind blew down my antenna, it costed me some time to repair and erect it. I felt like chasers are becoming lazy more and more, most of them seem to heavily rely on SOTAwatch spots rather than to search and pounce (S&P). I spotted myself on 20m and announced to be on 30m and 40m later, however there were no takers on 30m despite my long CQing. So, I spotted myself on 30m and got a nice short run. I decided to omit self-spotting on 40m and gather a couple of QSOs on 40m by calling CQ like in good old days. I got 11 QSOs with major share of non-SOTA chasers, and guess what, no one spotted me on 40m. With a mixed feeling I sent QRT over the air and packed my rig away. Altogether 28 QSOs were logged. 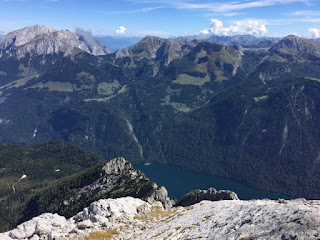 Picturesque view towards the Mooslahnerkopf. 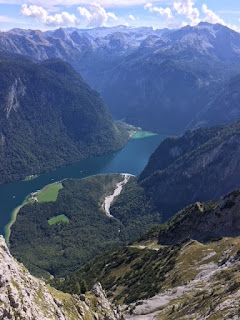 On the way to the Mooslahnerkopf.

On the way down, I started questioning myself about why I still take my QRP radio station to the high mountains...  Should I leave it at home next time?