I barely have time to blog every SOTA expedition I ever made. However, so far this year, this one was my best tour in quiet solitude! I think, it deserves to be written down.

I love hiking Allgäuer Alps, however they are a bit far from my QTH. Traditionally, I combine my Ham Radio visits in Friedrichshafen with a hiking tour in Allgäu.

So, the initial plan was to spend Saturday, June 2nd at Ham Radio in F'hafen, and if the weather would permit, to hike a couple of summits in Allgäu on Sunday, June 3rd. That was the plan, and it worked out well. 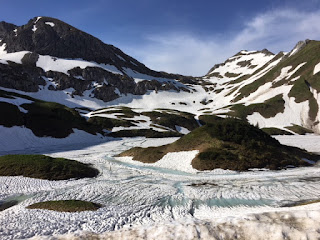 Unfortunately, I was requested to be home this day at 3PM latest, so that I had not enough time for activating DL/AL-036. There is no marked path to the Schänzlekopf (DL/AL-036) but I recognized that it could be doable from the Schänzlesattel (the saddle on the north-east side of the summit). 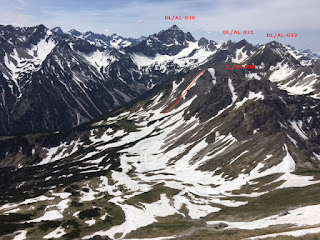 View from the Lahnerkopf DL/AL-038 on May 26th.
The anticipated route to DL/AL-036 is marked in red.

On the way to DL/AL-036 I wanted to check-in at the Roßkopf (DL/AL-190) which has been activated once in SSB and FM. The ultimate goal was to climb the Glasfelderkopf (DL/AL-033) to complete a triple activation in one day. Another lesson learned from my last tour to the Schrecksee was that I would ride a bike to the Giebelhaus rather than march the whole way up to the path entry point.

I arrived the parking spot in the Hinterstein on Saturday in the early evening. I was pretty tired, so that I felt asleep shortly after 9PM (that never happens at home). The night was shorter than usual, the alarm aroused me from sleep at 5AM. About 30 minutes later I was riding my bike towards the Giebelhaus.

I had the same issue twice – to find the entry point to the path to the Roßkopf. There are no signs neither to the Roßkopf nor to the Erzsteig route I wanted to go. First, I missed the entry while I was cycling and needed to return. Second, I couldn’t find the narrow path (Erzsteig) because of the freshly grown grass hiding it. So, don’t get surprised if you see this back and forth on my recorded track. All this resulted in a time loss of approximately half an hour.

There is no marked path to the Roßkopf (DL/AL-190), but it’s easy hiking. A quick check-in at the summit brought 18 QSOs on 40m in CW within 15 minutes of operating time. Due to time loss, I hadn’t called CQ on other bands. 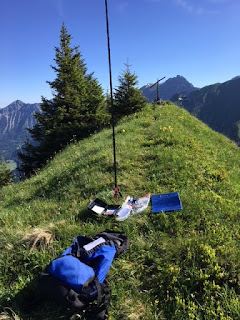 Passing the Sattelkopf on the way towards the Jubiläumsweg I assessed the opportunity to ascent DL/AL-036 from the south or west side. Almost no chance!? So, I decided to climb DL/AL-033 first and then try DL/AL-036 from the north-east side starting at the Schänzlesattel. 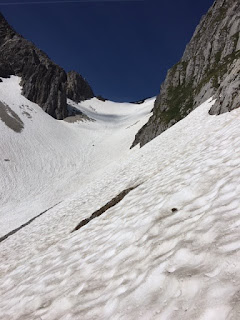 The way up to the Bockkarscharte covered by snow.

The way up to the Bockkarscharte was full of snow.  I discovered a sort of chimney (or couloir) going from east to west and spontaneously decided to free climb the summit from the south-east side to avoid trudging through the snow. I had much fun slashing my way through and enjoying the walk on the ridge. This route is wild, however much more exciting and challenging than the suggested one from the Bockkarscharte. You could just try it out by yourself! 21 QSOs on 40m and 12 QSOs on 30m were logged within 30 minutes of operating time. The way back to the Jubiläumsweg was quick – climbing down to the Bockkarscharte and sliding down through the snow field. Ohhh yes,  I got my shoes soaked in snow, that was the cost of using the "fast track" down. 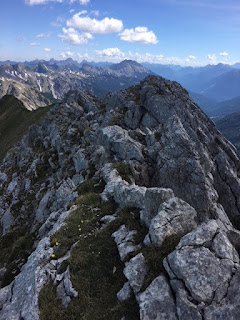 The ridge stroll I very enjoyed on the Glasfelderkopf, DL/AL-033. I still had a lot of energy left to try DL/AL-036 on my way back. Now I just needed to run around the Schänzlekopf following the Jubiläumsweg towards the Schänzlesattel. The saddle was still covered by snow. There is neither official nor marked path to the top, one has to find his own way. I found a suitable channel pretty quickly. After the last 200m in altitude were mastered in free climbing, I was quite surprised to see a big summit cross on the very flat and green top. I took a deep breath to feel the crystal clear alpine air, signed into the summit register, made myself comfortable on the top and logged 7 QSOs on 30m and 9 QSOs on 40m in about 20 minutes of operating time. On the way down I just noticed that I had less fun climbing this summit if compared to DL/AL-033 because of the highly steep grass and gravel fields. 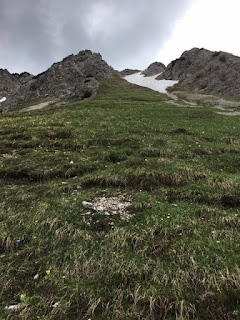 Chosen route to DL/AL-036 from the Schänzlesattel side - up and to the left. 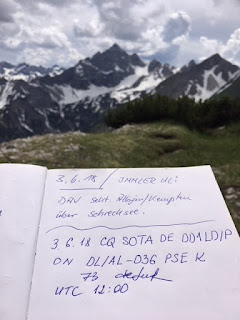 About two hours of descent later I arrived at the parking spot. I jumped in the car and jetted home as fast as I could, since I wanted to spend the evening with my family. Thanks to my XYL for her uderstaning and letting me do such crazy things!

Garmin says 42 km distance made in total for 2x8 + 1x10 points,  three summits, two first activations and 67 QSOs in CW. A couple of S2S were logged. The propagation was average to below average allowing to serve local and EU-based chasers only. 30m band was quite useable so that I didn't want to waste any time on 20m.

I only met one small group of three mountaineers during the whole tour, but a lot of marmots and chamois.  The WX (weather) couldn't be better. I came back home a bit exhausted and hungry like the wolf but deeply satisfied and mentally relaxed. And that's the only thing that matters to me!

The detailed track record (as .kml) can be found here.

A couple of more pictures from the tour: 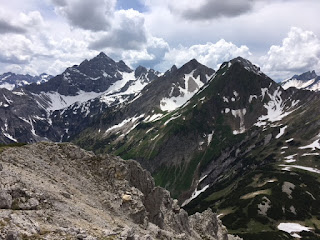 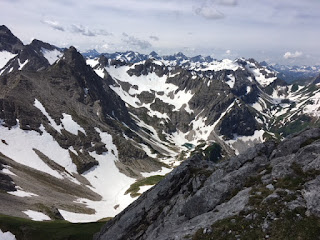 View towards the Seealpsee from DL/AL-033. 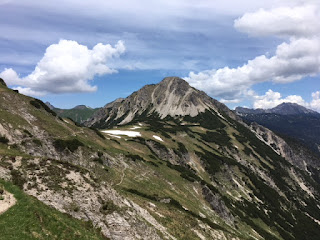 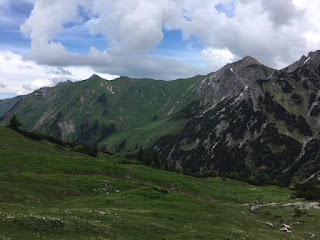 I love these beautiful green landscapes in Allgäu. 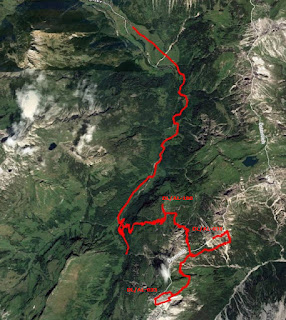