Friday, June 5th, 2020. Preparation.
It was a rainy week, and we needed some rain with all this dry weather. I was thinking of combining WWFF and SOTA activities as part of GreenParty 2020, however, the weather forecast was not promising for high-alpine expeditions, so I rejected this idea.  And what now? Should I go for a pure WWFF activation? I remembered that I wanted to participate in the GMA Triathlon this year, I still needed some activations of castles, islands and lighthouses to score points for an award.  We have some "problems" in Bavaria with islands/IOTA and lighthouses/LOTA, but no issues with castles/COTA. The ultimate goal was to find an area
I studied maps and weather forecasts for hours, and, finally, found a sweet spot. There is an overlap between the Mündung der Tiroler Achen, DLFF-0219 and the Winkl Castle, DL-04472, OBB-082. The DLFF-0219 was activated a couple of times by ~300 QSO in total, and the DL-04472 was not activated yet. It made me hope for a nice pile-up! The weather forecast for the Chiemsee lake area was promising inbetween 8:00 UTC and 12:00 UTC, and looked a lot better than in my hometown.  I announced my expedition for 8:00 UTC via the WWFF Agenda and WCA Group Reflector just a few hours before departure. 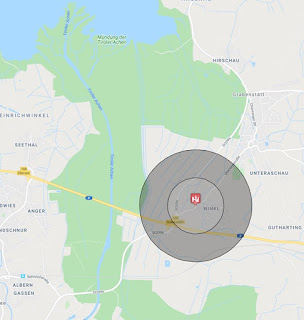 The operating spot was chosen in the overlap between the DLFF and WCA/COTA activation zones.

Then I had to study the GreenParty rules.  Initially I wanted to operate in CW and SSB, but I also found out that the category Mixed includes digital modes, in which I was not interested at all. So, I decided to go for CW only, and this was not the best option nether for me nor for all other chasers who can't do CW, since I spent almost all of my operating time collecting every CW QSO to maximize my score within a certain amount of time.  My goal was to collect 3 WWFF activator points at least, or, put differently, 3x 44 QSO = 132 QSO in CW.  I had a couple of hours for operating, since I needed to be at home at 13:00 UTC.

Saturday, June 6th, 2020. Activation.
I was going to place my station on a meadow in the overlap area between the WWFF and COTA activation zones (marked by red). The plan did not work, the meadow was already occupied, the cattle were grazing in the meadow. I had to move back and closer to the Rothgraben (to the right of the marked spot) and set-up my station just within the WWFF border. 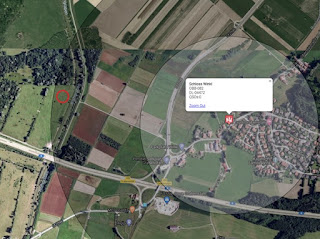 The border or the DLFF-0219 runs along the Rothgraben. The red circle marks the anticipated operating location. The actual operating spot was chosen near the Rothgraben to the right of the marked location.
The operating spot was the lowest point in the area close to the ditch and was surrounded by trees and an earth wall (on the right to the north) and, therefore, not ideal for RF but this was the only way to fully comply with WWFF and WCA/COTA rules. 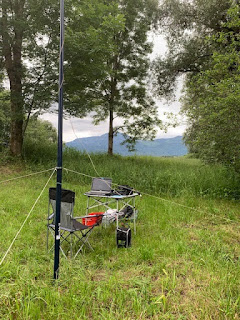 GreenParty 2020. My operating spot close to the ditch (Rothgraben).
View to the south. Chiemgau Alps in the background.

I started at ~8:30 UTC on 20m and made 27 QSO in half an hour. Then I switched to 40m and got a huge but short pile-up I really enjoyed! It was a very chaotic pile-up but I was able to handle this kind of chaos. The pile-up resulted in 50 QSO in ~35 minutes.  The pile-up died away quickly, and I was collecting the rest QSOs on 20m and 40m at a moderate rate until the rate dropped significantly. I had short runs at 80m and 15m without a single QSO made. Then I was constantly switching between 20m and 40m and collecting every QSO I could get. The overall result was not really exciting, I made 137 CW QSO on two bands in 3.5 hours of operating time.  More than half of QSO were done in the first hour, and 90 QSO were done in the first two hours. Well, the propagation was poor, the location was not ideal, and I decided to omit SSB, and I still have to work on optimizing my antenna, and, and, and. At the very end I had a very short run at 30m and got 2 additional QSOs in the log. Unfortunately, I had no time for SSB and had to leave with 139 CW QSO including 10 P2P QSO in my log. 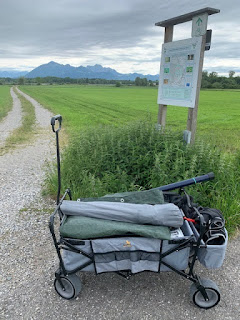 My portable station in a trolley that I had to move for 1km. I left my car in the Winkl parking lot.
The Kampenwand (1668m), DL/CG-046 in the background. The rain was coming.
The current rules of the GreenParty come very close to a contest-like operation. I found the number exchange pretty annoying. I had to send F0219 to every chaser. Many chasers were not interested in it, and did not want to have it, and did not even know what it meant. It also disrupted the usual QSO flow, so many chasers replied to me as soon as they received 5NN, even though I was still sending F0219. Also, sending F0219 to everyone was not "green" (not environmentally friendly) at all, just a waste of battery energy. I decided not to ask and push for any numbers, and if a chaser did not give me a number by default, I logged 000. This made the operating flow more fluid. Some chasers gave me a number at the beginning and no longer later. An exchange with other /P was mandatory and fairly straightforward.

I relied heavily on RBN and chasers' spots. At home I found out that some activators spotted themselves via the WWFF watch/cluster saying GreenParty. The rules state "self-spotting is not allowed". I am not sure if they even recognized this before submitting their logs, or they will not submit their logs for ranking at all.  Let's see.

This was my first time attending this event. The overall idea is really good and the event was fun. However, the whole thing is not yet mature and has more potential to become more successful and widely accepted. I guess if GreenParty organizers design the rules around the usual WWFF operating flow, they will get much more acceptance from WWFF activators and chasers to participate and, especially, to submit a log. Anyway, I shared my constructive feedback with the organizers. Let's see.

The nicest part was a pile-up on 40m, I already forgot when I had such a pile-up. Well, I can imagine doing a few other rural COTA activations.

And, of course, I took a picture of the Winkl Castle, before I hit the road home. The castle burned down in 1994 and was only renovated a few years ago, and equipped with nine living apartments. Architecturally, the building is more like a manor house than a castle. An eventful and rich history of the Winkl Castle has been demonstrated since the 15th century. Unfortunately, not much information is available on the web. 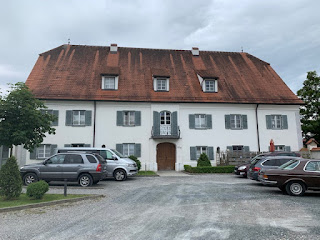 As soon as I entered the highway it started to rain. Good timing! I arrived home just in time.