SOTA roundtrip to the Black Forest

Thursday, April 9, 2009. Personal business caused me to spend one day nearby Frankfurt. I offered Maria to accompany me on tour and she certainly agreed. As I usually do, I also packed my SOTA equipment in the car. In the late afternoon we had enough free time and decided to visit the Grosser Feldberg, 879m (DM/HE-003) in the Taunus Park close to the city. We drove by care to a parking spot on the top and walked the last part, just like the SOTA rules require. We also hoped to enjoy a great view from the top, but our hopes were completely dashed as soon as we achieved the summit – Frankfurt’s down town was too far away and, frankly, the overview over Taunus was not really spectacular, too. Just as we both found this hill quite boring I set up my portable station at app. 6 p.m. and started CQing permanently struggling with QRM emitted by several telecommunications towers. Altogether 10 QSO were done with my brand new antenna on 40m in CW although I was expecting more chasers. After a short snack break at sunset we made a loop around towers and came back to the car. The easily earned 10 points and a brief journey through the Taunus Park culminated this Thursday 9th of April. More about the Grosser Feldberg you can find at Wikipedia. 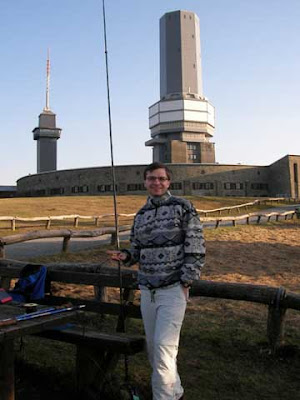 DD1LD/p on the Feldberg
Friday, April 10, 2009. Next day afternoon we went to the Mummelsee in order to activate the highest summit in the Northern Black Forest – Hornisgrinde, 1164m (DM/BW-019) being already activated 12 times (!). We were so happy to have warm sunny weather over Easter that we spontaneously decided to spend Easter time in the Black Forest and make the most of the opportunity to visit our good friends leaving in Karlsruhe. The Mummelsee was quite overcrowded these days, therefore, we decided to start with hiking the Hornisgrinde. We enjoyed a nice short walk through the forest still lying under snow, on the top we found very fast a spot in the high moor (called in German “Grinde”) suitable for operating.
CQ SOTA de DD1LD/p… First chasers in log… Spotting… Enjoying one of these pile ups I so love… 27QSO in CW on 40m just in 20 minutes.
The new antenna concept seemed to work well, all the signals from UK were quite strong, and there were no problems with working neighbor stations, too.
We went for an afternoon stroll and easily gathered 10 points for that. Not bad! We ate our supper at the Hornisgrindeturm, went down another way and pushed on to the hotel Bon Bini Schloss located on the Silberberg (unfortunately not referenced). In the late evening we planed our next tour for Saturday the 11th of April, which should be tougher than previous two, but not so tough we finally had. 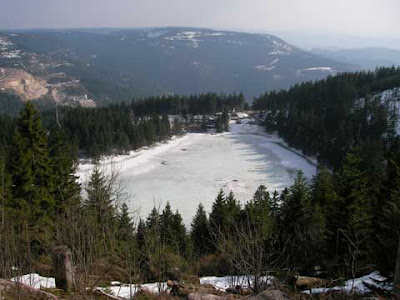 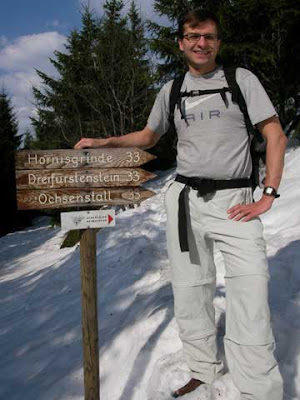 On the way to the Hornisgrinde

Saturday, April 11, 2009. On Saturday after a long breakfast we went to the beautiful Stausee am Schwarzenbach. We put the Badener Höhe, 1002m (DM/BW-047) and Streitmannsköpfe, 989m (DM/BW-494) on the “to be activated list”. The path to the Badener Höhe was everywhere well signposted, we parked somewhere in the middle between the reservoir and Herrenwies and started hiking towards the Badener Höhe through the Herrenwieser See. The Herrenwieser See was still frozen like the Mummelsee we visited one day before but the passage was almost snowless. There is a lookout tower in the hill top called Fridrichsturm build by Duke Friedrich I. von Baden in 1891. Actually, this kind of observation towers is typical for many hills in the Black Forest. We found a nice place on its foot and I got set up my rod aerial and began CQing on 40m in CW. As soon as I worked two-three chasers I was spotted and I felt very well when enjoying a short but huge pile up and comfortable sitting in the sun at a chill temperature of 20°C. We packed, returned to the Herrenwieser See and moved on towards our next destination – Streitmannsköpfe (not activated, a new one). The problem we had to struggle with straight away were direction signs, actually, there were no direction signs to the Streitmannsköpfe at all. We got lost several times but thanks to Garmin we somehow arrived at the summit. Almost every hill in the Black Forest has a dozen of roads around it leading to the unknown, it is very easy to get lost without direction signs. We both found the Streitmannsköpfe, its top and the passage quite boring but in spite of everything the first activation was worth the effort. We paid a short visit to this hill, I interrupted operating because it started spitting. It looked like a rain but we only got a few drops. The propagation on 40m was very good, all the signals were unexpected strong despite numerous trees around. In the early evening we were going back to the car along the picturesque Stausee looking as pretty as a picture. On the way back we briefly stopped at the dam, took a couple of pictures and then jetted to the Bon Bini Schloss (which revealed to be a nice family hotel with a great view down to the Huzenbach valley) for dinner. 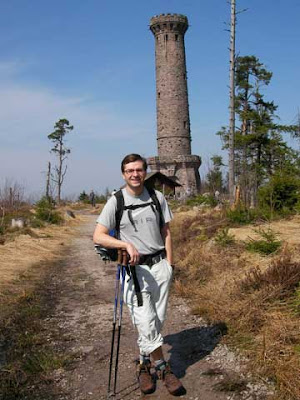 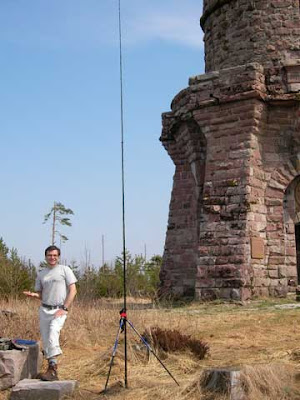 DD1LD/p on the Badener Höhe testing a new antenna concept 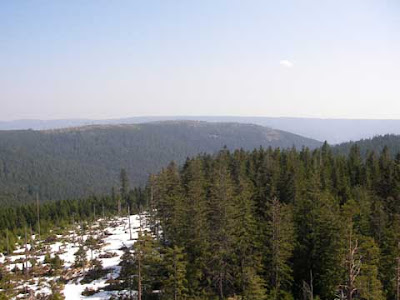 Streitmannsköpfe (on the back) still waiting for its first activation 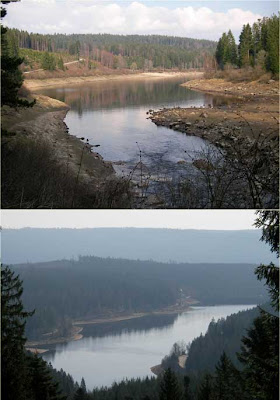 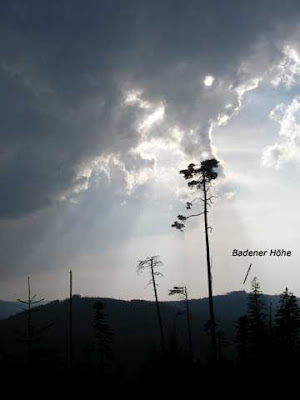 Sunday, April 12, 2009. Sunday was supposed to be a lazy day. After our check-out was complete we drove to Forbach and made a short excursion. Then we leisurely moved on by car to the Hohloh, 984m (DM/BW-054). The only “very last” part had to be overcome by muscular strength. The course of events seemed to become like a standard: climbing an observation tower (here Kaiser-Wilhelm-Turm), looking for a nice sunny spot, setting up the radio and aerial, operating, packing all the stuff away, walking around and finally going back to the car. One may ask what Maria was doing whereas I was operating. She also was relaxing all the time lying in the sun and reading a fascinating novel. So I had enough time to additionally test my new aerial on other bands and in SSB. I made a couple of contacts on 30m, 21 ones in CW and even 9 QSO in SSB on 40m. The antenna showed a quite outstanding performance in spite of its small size. Afterwards, I listened to the radio on 30m again and followed some QSOs for a half an hour before we decided to take a look at the Hohlohsee. We made a short loop around the lake lying in the high moor and surrounded by a wooden footbridge, red a couple of very informative warning signs being up everywhere and finally decided to move on in the direction of Karlsruhe. In all, the Hohloh was an easy haul worth 10 points! 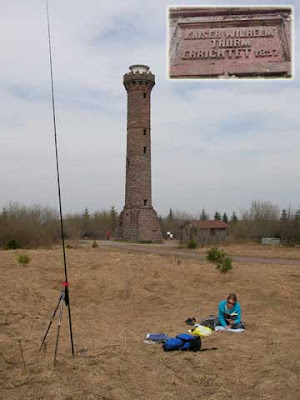 On the Hohloh. One may ask what Maria was doing all the time... 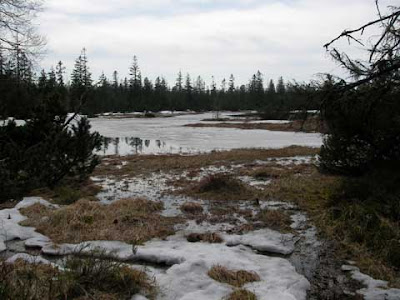 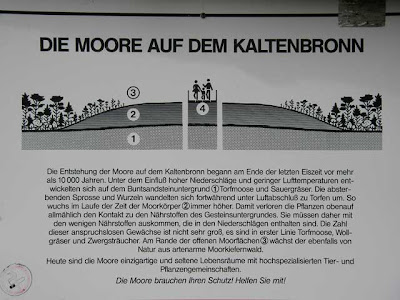 I remembered that there was a local hill called Merkur, 668m (DM/BW-103) nearby Baden-Baden being worth 6 points and having a Gasthaus on the top. It could be a nice place for dinner! In less than one hour we were on its foot and started hiking on the zigzag way. Even though the Merkur is lower than Hohloh the climbing was comparatively more strenuous and we arrive at its top too late to have dinner there. Maria asked me for a concise operating what I followed without argument, 2 QSOs on 30m and 11 ones on 40m came in log. I had some problems to catch chasers on 40m because firstly, the SOTA frequencies were occupied by contesters and secondly, we were just too late. Many people were looking at me like I was an alien, they got confused faces as soon as I started pulling the fishing rod and twisting a piece of wire around it. The Merkur has a great view around but is quite overrun due to proximity to the famous resort Baden-Baden and the last, but not the least, there is a cableway. Unfortunately I had a little of time to enjoy this great view, we were expected in Karlsruhe and time was running away. We arrived at the parking place in the early twilight and after a short break got in the car… the late evening we spent with our friends in Karlsruhe. 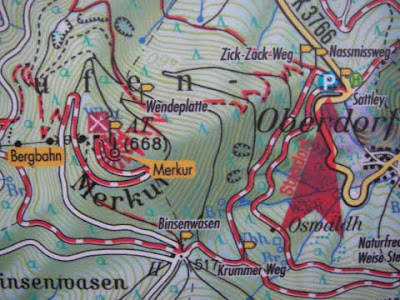 Of course we chose the zigzag path 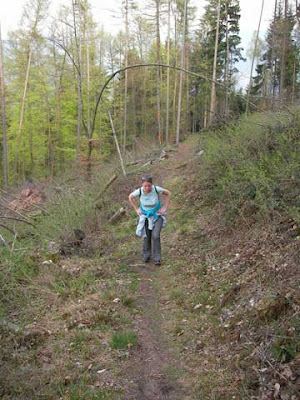 "Challenging" zigzag path to the Merkur 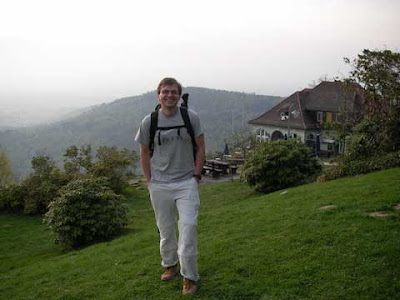 Merkur has a nice view around 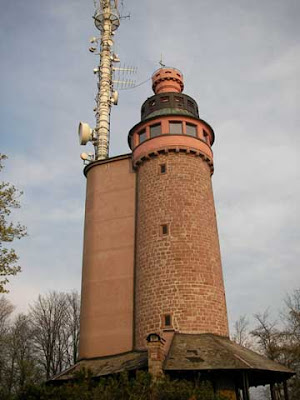 Merkur tower build in 1837. Where the QRM was coming from?!
Monday, April 13, 2009. For Monday we planned to leave Karlsruhe afternoon to get home early and avoid frustration of stucking in a traffic jam. I was so keen on a SOTA pile up that we decided to make a stop right now after we passed Stuttgart and activate the Kornberg, 779m (DM/BW-094) very close to the highway. We needed a good half of hour to reach its top and a couple of minutes to set up all the equipment and to make ourselves comfortable before I started CQuing. I was just keying TRX to tune Elecraft T1 as I heard “QRZ?” and “call?” Yes, chasers were listening out on 7.033MHz like a cat is lying in a wait for a mouse. The first CQ run was answered by two chasers at once! I enjoyed a nice pile up and Maria - her novel for the next half of an hour. Altogether I grabbed 25 QSOs in CW and 8 points. There were no communication towers around in comparison to Merkur where I also had to struggle with QRM, and all the signals were crystal clear like an icicle. The Kornberg is a dull hill having a flat and bald top surrounded by trees, therefore, we went down as soon as I worked the last chaser, we rather decided to dine and spend the last bit of the day in Ulm, what turned out to be a right decision. We left Ulm in the twilight and we arrived at Munich at 9 p.m. and, thus, happily finished our five days journey trough Germany we both enjoyed very much. 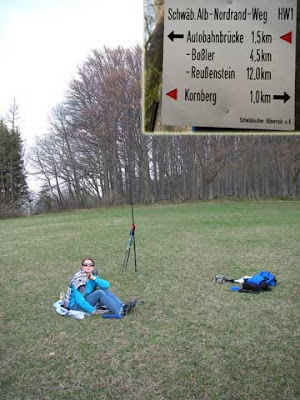 The last activated Kornberg close to the highway
Altogether I made 165 QSOs, activated 7 summits (one first activation) and picked up 64 points. The new aerial concept was successfully tested on 30m and 40m bands, it will only need some minor improvement. My FT-817 all-rounder I specially tuned for SOTA activities did a good job!

Many thanks to all the chasers who worked me!