It was one of the activations when some things just go wrong… Below is the story.

This Friday was a pretty busy day and I came home very late.  On Saturday I had to be in Egmating at 11:00 UTC. The weather forecast was nice, and I decided to cycle about 25 km there. I was thinking about a possible GoGreen XOTA activation on Saturday morning. The choice fell on the Falkenberg Castle, which has just been given a fresh WCA reference number, DL-05243. I decided to operate from the forested Höchenberg (607m), DA/AV-217, which is in the activation zone of the castle. Both WCA DL-05243 and GMA DA/AV-217 have not yet been activated. The detour for activation would have added 10 km more, so the total distance would be approximately 60 km. Okay for me!

The plan was to get QRV at 7:00 UTC, collect 100+ QSOs, QRT at about 10:00 UTC and continue to Egmating, and the plan only worked partially. Late at night I announced my activity through the WCA Group's reflector, set up the environment for this activity at www.tnxqso.com and went to bed.

I was just too tired to get up in time…  I still felt tired and enjoyed a large coffee while packing everything on my bike. The fresh air and cool temperature below 20°C quickly got me going. I arrived at the Höchenberg at 7:20 UTC.  Actually, the right option in the deep forest would have been to throw my wire antenna over a tall tree. However, I was too late, the forest was quite damp after yesterday's rain and full of annoying mosquitos. So, I opted for a more convenient option, a pole instead.  I found a suitable operating location directly on the forester's path. 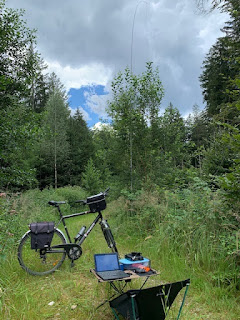 The first QSO was logged on 20m at 7:45 UTC and ¾ hour behind the schedule. I knew that the operating QRP in the deep forest could be a challenge, but I just love challenges. The radio operation was tough, the log was slowly filling up despite frequent DX-cluster spotting. The aggressive mosquitoes stung mercilessly. There was a lot of QSB on 20m. So, I spent almost all the time on 40m. The received RST reports indicated the weakness of my signals.  The propagation on 40m improved somewhat around 10:00 UTC, but I had to go with 93 QSOs in my log.  I painfully missed some familiar COTA and GMA chasers, and I just missed the 100 QSOs threshold by 7 QSOs 😞.

On the way to Egmating I made a stop to take a mandatory picture of the activated castle. The Wittelsbach family had a castle built in Falkenberg at the beginning of the 12th century, the ruins of which later became the Falkenberg castle. In the 436 years of its existence, the castle was sold a total of 18 times, 12 times in the past 200 years alone, and it was only inherited 8 times.  The rich history of the castle is well summarized HERE. 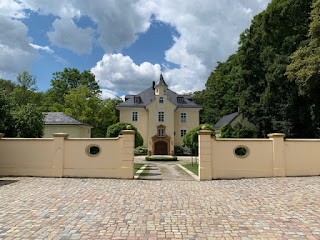 The Falkenberg Castle,WCA DL-05243.
The castle has been privately owned again since 2000 and is closed to the public.

The route to Egmating was hilly and mostly led through meadows and forests. I made it just in time… Beautiful!


After today's activation in the morning, I didn't really feel happy.  A short and harmless rain greeted me twice at noon, then the sun came out and greeted me too... 😁 So, on the way home I spontaneously decided to activate the Stürzerberg, 557m, DA/AV-199 close to Purfing and only 7 km from my QTH.  Incidentally, I had to learn that the heath on the western slope of the Stürzerberg is a natural monument, a natural landscape that is under nature protection.

A pure GMA activation is always a tedious task because there are not so many takers compared to WWFF, COTA and other programs.  You should have enough time and patience for a pure GMA activation if you want to achieve more than 4 mandatory QSOs. It's just a different kind of challenge for an activator.

I still had some time. The weather was just nice. I set up my QRP station directly on the hill and started CQing in a cozy and rural atmosphere. 15:00 UTC. I called CQ, chased some WWFF areas, called CQ again and enjoyed the great view from the hill.  In the end I was able to log 28 QSOs in about 1 hour of relaxed operation, 3 of them were with WWFF.  A slim result, but better than nothing, sorry, better than 4 mandatory QSOs anyway. 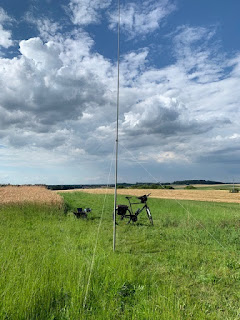 When I got home, the GPS tracker showed a little over 60 km. Although the number of QSOs was not impressive, three XOTA objects were successfully activated. I ended this beautiful day with a nice dinner with well-deserved cool beer... and 121 QSOs in total, 4x Castle-to-Castle and 5x WWFF.


I stared at the monitor in horror and didn't want to believe my eyes. What on earth was going on here? Ten QSOs were missing from my yesterday’s activation log of the Stürzerberg, DA/AV-199. I used the FLE SW for logging and for some reason, I don't understand, I was missing 10 QSOs 😡. I was pretty sure I clicked the save button a couple of times before closing the logging GUI. All attempts to restore the log electronically have failed. After an hour, I was able to restore 6 QSOs based on my human memory, as well as on database and DX-cluster cross-checks. At the end, I was able to submit an activation log with 24 QSOs versus the original 28 QSOs. Lesson learned - backup, backup, backup. Even a few simple measures like taking a picture from the screen would have been extremely helpful in such a case. I have to think about it!