This was a spontaneous afternoon GoGreen activity. There are two fairly fresh WWFF areas close to my QTH: the Garching Heath, DLFF-0701 and the Echinger Lohe, DLFF-0700 are less than 25 km by bike. I was thinking about activating the two areas by a single expedition. But I decided against it as it would have been pretty stressful for an afternoon activity, and would have been penalized by a small number of QSOs from each reference.

I left home 40 minutes later than planned. I arrived at the Garching Heath, DLFF-0701 in about one hour by bike, at 9:45 UTC. The Garching Heath is home to over two hundred plant species, around fifty of which are on the Red List of Threatened Species. In the Garching Heath there are two groups with burial mounds from the Bronze Age. And you can still see some of them. The necropolis dates from between 1,800 and 1,000 BC. In addition, four funnel pits from antiquity were located. Some more info and great pictures can be found HERE.  Definitely an interesting place to visit! 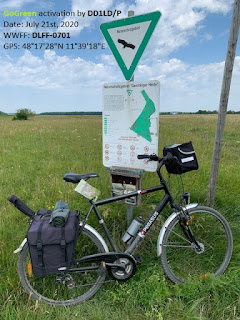 Arrived at the information stand at the Garching Heath, DLFF-0701.

I took some time to find a nice, shady and hidden place for operating the radio. The first QSOs was logged at 10:20 UTC.  The propagation conditions on 30/40m were strange with deep QSB, the time was not optimal to expect a large number of chasers. The 20m band was open which resulted in some nice DX like K and UA9.  The radio operation with 5W QRP was tough... and slow-moving that day.  So, I decided to call other /P-stations on 20m and was immediately successful in SSB with YLFF and RFF.

Shortly after 12:00 UTC I saw a man approaching me. The first thought was that it was a park ranger or a curious visitor. On closer inspection, it turned out that it was Rafal, DL9RNV, who lives a mile from here and just wanted to pay a visit. It was a nice and welcome change. I was happy to interrupt the tough SSB operation flow on 40m for half an hour for a chat with another like-minded radio ham. Thanks Rafal for stopping by! 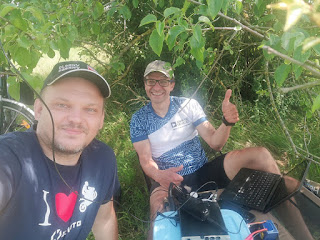 Rafal, DL9RNV visited me spontaneously during my activation of the Garching Heath, DLFF-0701.
GPS of the operating spot: 48°17'28"N 11°39'18"E.
Initial plan was to QRT at about 12:00 UTC. I logged less than 100 QSOs. I had some time and decided to continue while diligently collecting every QSO when a heavy rain shower suddenly came. Thank god I was able to stow almost everything away before the first drops fell. Some equipment and I got pretty soaked. I had to hide under a tarp for a while. As soon as the short but heavy rain stopped and the sun shone again as if nothing had happened, I made my way home with 145 QSOs in the log.

This time I used TNXQSO.com, and it was fun again! It definitely brought me a few more QSOs, especially with UA. And again, some chasers should have checked the live log better before desperately calling me over and over again. I mean, they just lost a lot of time. But never mind! The live chat feature is also quite useful. The only feature that currently doesn't work for me is live tracking. However, I can use the chat function to inform chasers of my status.

The bike route through the countryside was pretty beautiful and lonely. In general, I was satisfied with this GoGreen activity. So, I'm looking forward to the next activation of the Echinger Lohe, DLFF-0700 soon.

Good activity, OB! Thank you for the story.

I've checked and found your call sign in the 21'st July log of my friend Stan UA3LMR ))) It's a pity that QSO didn't happen between us.
We were not GoGreen, we four — UA3LAR, UA3LNM, UA3LMR and I, RN3ANT arrived at that place in two cars and activated ATNO RFF-0220 deploying three workplaces. That is the highest point (319.9 m asl) of the entire Smolensk oblast, RFF-0220 and also the Museum of A.S.Griboyedov (1795–1829).

GoGreen is cool idea! I should to think about it.
73! Yours,
RN3ANT