Hello and welcome! I'm Dzianis, a licensed radio ham holding the callsign DD1LD. I love to take this hobby with me wherever I may roam. The blog "QTC de DD1LD" means "News From Me" and reflects my ham radio activities and projects. I barely have time to write everything down, so I blog occasionally, and mainly, for myself. You can subscribe to the blog below to receive updates when new posts are available. 73 and enjoy reading!

Westerberg, DL/MF-112 - a lonely summit close to the Schliersee lake

Sunday, May 17th, 2020. This a was a spontaneous activity with Andy, DL2DVE and Kirian. Initially I was thinking about the Staffel, DL/BE-021. However, the weather forecast for Sunday was very good and I expected a large crowd of walkers in the Alps. So, my choice fell on the Westerberg, DL/MF-112, since:
We arrived at the parking lot Dürnbach-Bodenschneid in Neuhaus at 7:00 UTC. The parking area was fully occupied so that we had some issues to park our cars there. Thank goodness, we learned quickly that all these walkers and bikers were not going to approach the Westerberg, the majority of them wanted towards the Bodenschneid, DL/MF-041.  We ascended the mountain from the south, the last part of the hike was pathless through a windthrow (SAC level T2/T3 without marking). It looked like Kirian enjoyed this part most as it was a new challenge to him.

Andy and me started CQing at 9:30 UTC on 20m and 40m respectively. After a couple of QSO and five minutes later a Spanish station just started calling CQ EA EA5... TEST on my frequency, although the QRG was obviously busy. Moreover, this station tried to answer SOTA chasers' calls. The chaos brought out. I hoped that the OM will quickly grasp that something was going wrong, but he didn't while continuing calling TEST.  I even tried to answer his CQ by myself, however, without any success. The station was incredibly loud and deaf, I was able to finish a couple of QSO more in between his signs and decided to QSY on 20m. Well, what else a QRP station like mine can do? I made a short run on 20m and a longer one on 30m, and after 45 minutes of operating, I decided to QRT and leave 40m to Andy. The propagation was OK for EU, we keyed as long as it made sense. 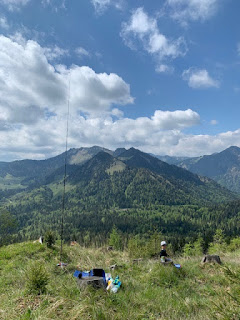 While Andy was still collecting last chasers on 40m Krian and me had a light lunch while enjoying the beautiful scenery towards the souths. From this point the view is gorgeous towards the Brecherspitz, Bodenschneid and Wallberg. Then, I had a short run on 2m FM, we examined Andy's optimized GPA, packed everything together and started our descent at 11:00 UTC. 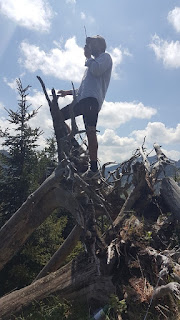 I had to climb a pile of old trees to get better signals on 2m FM.

By the way, we cleaned the mountain top and took out the garbage that a group of stupid teenagers (according to some photos we found above) left behind some time ago. 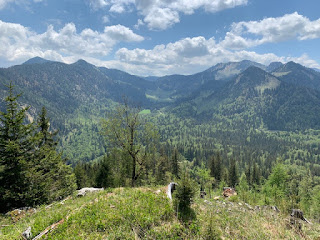 A gorgeous view from the Westerberg to the south.

I activated the Westerberg on each of 40/30/20 and 2m bands by 33 QSO altogether. While we were talking about ham radio, an hour and a half later we arrived at our parking lot and we were all still full of energy! I only emphasized it once more that a SOTA activation (4 QSO required) is easy if compared to a WWFF activation (44 QSO required), especially if QRP is considered. And yet half an hour later Kirian fell asleep deep in the car. He was slowly becoming a big boy!

Email ThisBlogThis!Share to TwitterShare to FacebookShare to Pinterest
Labels: SOTA